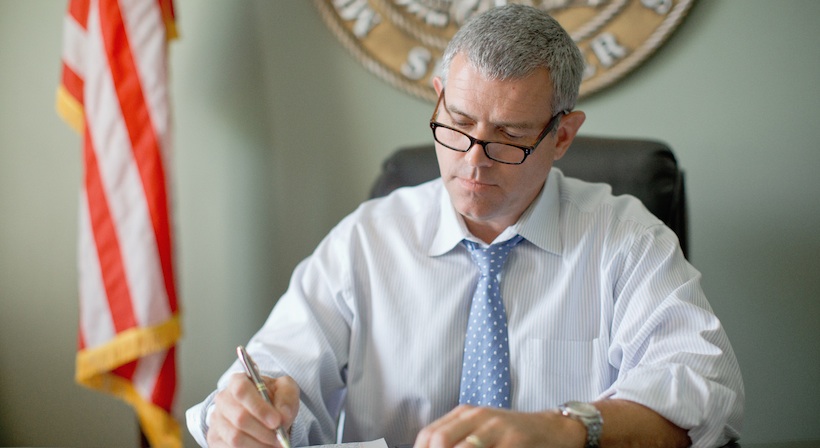 During the last few weeks (and weekends), members and staff have logged many hours drafting legislation and introducing bills. To “introduce a bill,” a member submits it to the Clerk’s Office, the drop box on the House floor or to the Speaker’s Office. Once bills have been introduced, they are referred to committees.

This week and next week, members focus their attention on meeting the February 4 deadline to report bills out of committee. Committee members discuss the bills and decide to either pass them to the House floor or to oppose them, essentially “killing” them. If a bill does not make it out of a committee, it will not make it to the House calendar.

Members of the Appropriations Committee continued to hear from numerous state agencies that presented their funding needs for Fiscal Year (FY) 15. During the summer budget hearings before the Joint Legislative Budget Committee (JLBC), some members questioned the Department of Public Safety (DPS) about their spending. This week, DPS came forward to review their FY15 requests line item-by-line item. The agency oversees 13 different divisions. Among the items requested, they asked for funding for a trooper school. This would be a $6.9 million one-time expenditure. DPS also addressed member concerns regarding efficiency issues at local driver’s license renewal stations.

Governor Phil Bryant also delivered his third State of the State address during a joint session of the Legislature in the House Chamber Wednesday evening. In his speech, he outlined his priorities for the 2014 Legislative Session and covered his accomplishments over the last two years. He called for education and health care improvements, job growth and additional economic development projects, and the importance of a responsible budget.

The Ways and Means Subcommittee on Severance/Temperance held an informational meeting that addressed allowing craft beer manufacturers to sell their product on-site. Witnesses from both sides spoke on the pros and cons of the issue. Representatives from the Mississippi Malt Beverage Association and the Craft Beer Industry were in attendance.

On the House floor, the Transportation Committee presented House Bill 350 (HB350). HB350 requires in-person classroom instruction for people under the age of 18 to take a traffic safety violator course should they receive a traffic ticket that results in their license being suspended. The receipt of this instruction allows their license to be reinstated and their record expunged. The bill passed on a vote of 87-31.
House Bill 391 (HB391), from the Wildlife, Fisheries and Parks Committee, deletes the repealer on regulatory authority of the Wildlife, Fisheries and Parks Commission to regulate native and non-native cervid (an animal of the deer family) enclosures. Continual regulation is needed to ensure the safety of the animals inside the enclosures. The bill passed on a vote of 105-2.

The Mississippi Firefighters/Fire Chiefs Associations visited the Capitol on Thursday. John Pope, President of the Mississippi Fire Fighters’ Association and Fire Chief for the City of Collins, shared the groups’ legislative priorities. This year, they hope a bill passes that will increase the death benefits for families who lose loved ones in the line of duty. Families currently receive $65,000. They are requesting the benefit amount be raised to $100,000.

Additional visitors to the Capitol this week included several education groups that lobbied for the full funding of the Mississippi Adequate Education Program (MAEP) and teacher pay raises.